Ho Chi Minh City, April 27 2016, CHANGE/350.org Vietnam and the Vietnam Sustainable Energy Alliance (VSEA) hosted a seminar “Power shift: change to tackle climate change” at the Vien Dong Hotel, at 275A Pham Ngu Lao, Q1, HCMC. The seminar aimed at promoting voice of the community in ensuring sustainable development of the country, raising awareness about the connection between energy development and climate change and other environmental and social issues, and suggesting practical and feasible solutions in the country’s contexts. 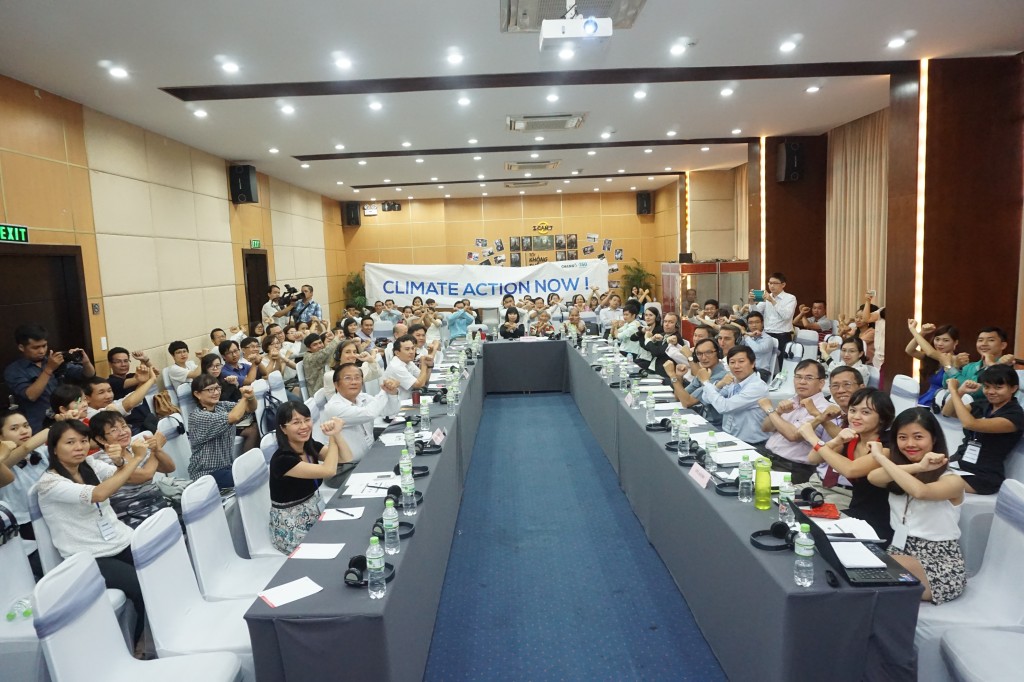 During 4.5 hours of the seminar, presentations and discussions revolved around a series of topics: Climate change and its impacts in Vietnam; Impacts of coal-fired power plants on the environment, society and sustainable development of Vietnam in relationship to reducing carbon emission and mitigating climate change; Revisions of the 7th Power Development Plan; Future of RE applications in Vietnam: challenges and solutions.

Speakers and specialists from international NGOs shared about the post-COP21 commitment by the government leaders worldwide in cutting down greenhouse gases emissions, to keep temperature increases to well below 2 degrees celsius. In order to reach this target, the global electricity sector needs to be decarbonized by 2050. Vietnam is a part of the Vulnerable Countries Forum which has committed to keeping temperature increases to below 1.5 degrees Celsius. However, Vietnam is heading toward the opposite direction of the global trend in terms of energy development, being the world’s thirst largest builder of coal power plants. The country is planning to have a total 55GW of coal-fired generating capacity by 2030, and coal power will make up to 53% of the total power production[1], despite the abundant RE potentials, particularly solar and wind.

In addition to the discussions on energy, speakers at the seminar brought out the latest updates on the climate change situation in Vietnam, including the record drought and salinization in Central and Southern Vietnam in the last three months, causing severe consequences on the community and the local economy. Coming from Ben Tre Province, Mr Pham Thanh Trung spoke at the seminar: “My homeland in Ben Tre is suffering from the worst drought and salinization for decades. It has made me feel concerned about climate change, which we have usually heard of. Climate change is not a future threat, it is happening right now, and impacting our own livelihood. I just got information that new coal-fired power plants will be built in Mekong Delta, which will even worsen the air pollution and climate change. I am really worried now.” 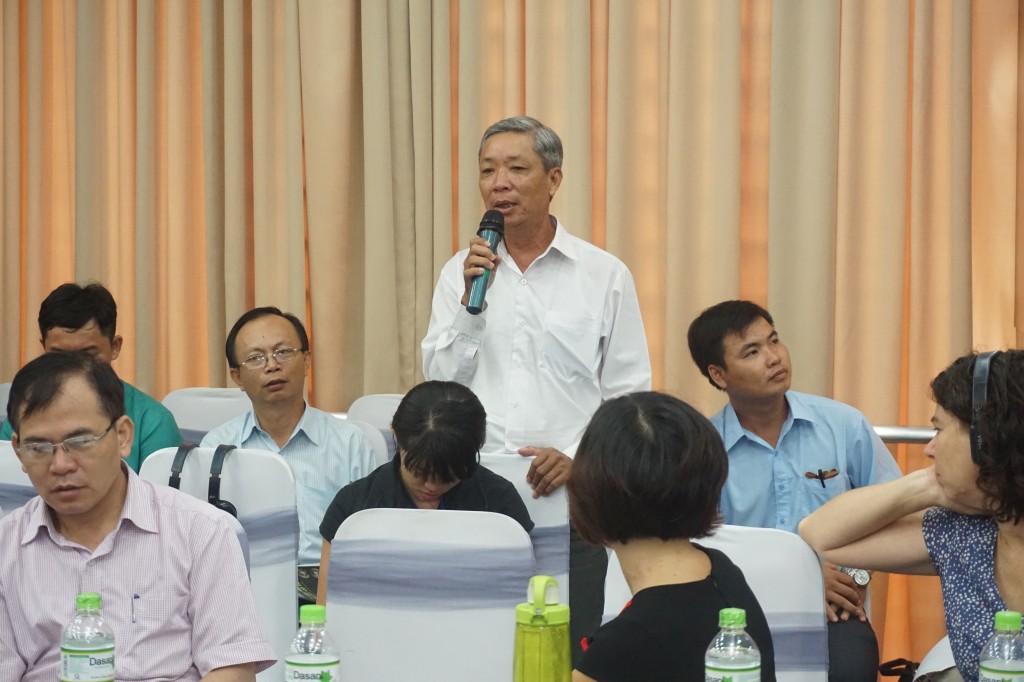 Sharing concerns over the same issues, representatives from both governmental and non-governmental organizations, scientists and investors, brought out suggestions for sustainable energy solutions for Vietnam. Increased awareness of the community and media, the engagement of the scientific community and corporate sector, and the proper attention of the government leaders, will be key in achieving sustainable energy future for Vietnam. In the coming period, CHANGE/350.org Vietnam will continue its creative awareness raising campaigns, and activities to support climate impacted communities, to join hands with VSEA and its partners in reaching even farther goals in policy commitment and community capacity building. 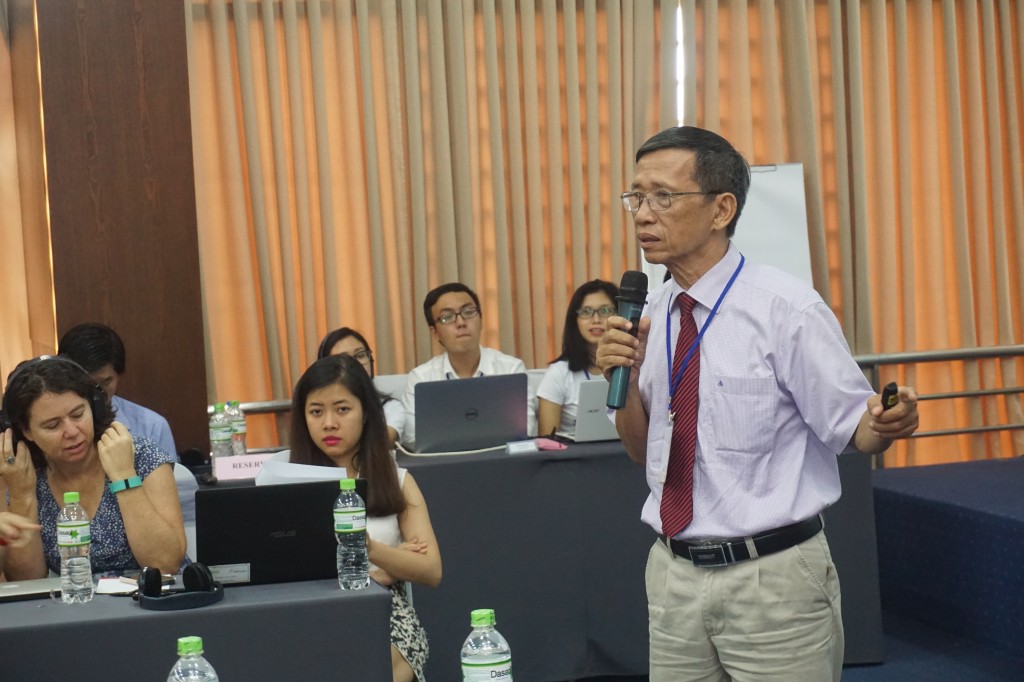 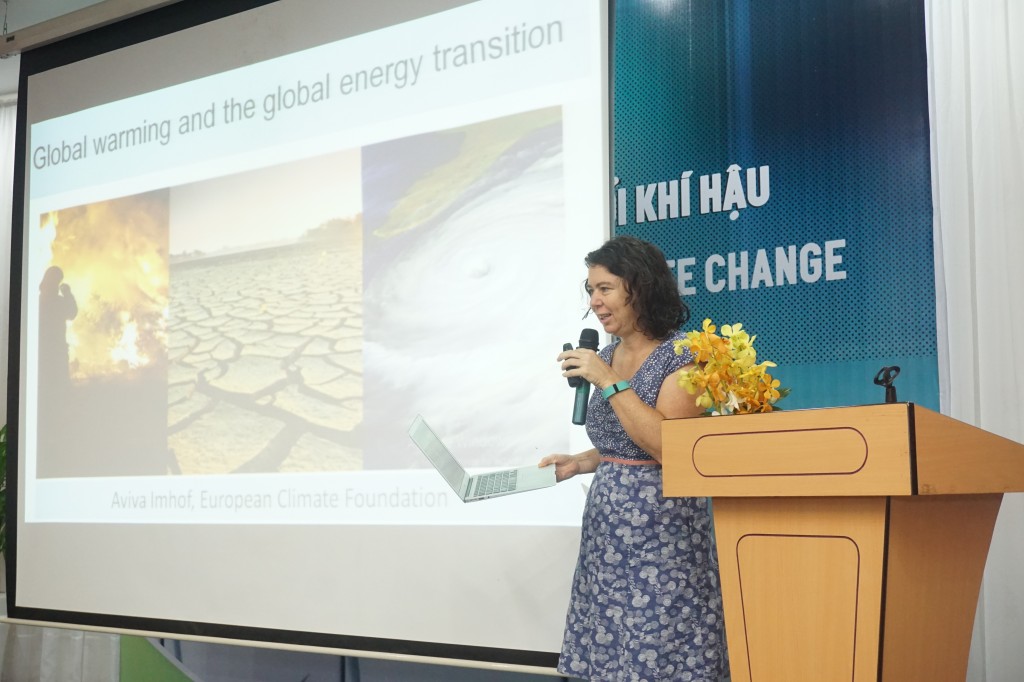 Within the framework of the “Contribution to the effort in promoting sustainable alternatives to coal power in Vietnam power mix” project by VSEA, the seminar aimed to get more attention of the community and policy makers about coal power issue in Vietnam.

Within the framework of the “Contribution to the effort in promoting sustainable alternatives to coal power in Vietnam power mix” project by VSEA, the seminar aimed to get more attention of the community and policy makers about coal power issue in Vietnam.

Center of Hands-on Actions and Networking for Growth and Environment, registered under the Vietnam Union of Science and Technology Associations (VUSTA) is a Vietnamese non-profit organization. CHANGE is the official national partner of 350.org in Vietnam. The organization aims to develop and mobilize resources in order to raise awareness, change behavior and build capacity for the community to tackle environmental and climate change issues.

350.org is a global climate change movement started in 2007 with the participation of millions of people from 188 nations. Number 350 in the name of the movement means 350 parts per million (ppm), which is the safe upper limit of carbon dioxide (CO2) in the atmosphere according to the latest science. The greatest purpose of actions and activities by 350.org worldwide is reducing this level from the current 402ppm to 350ppm so as to prevent serious consequences of climate change. Up till now, 350.org Vietnam movement has attracted the participation of over 10,000 volunteers nationwide.

Emissions from coal-fired power plants not only lead to climate change, but area also the greatest single threat to the climate and cause over 800,000 premature deaths worldwide annually [2].

Vietnam is the world’s third largest builder of coal-fired power plants, while the world switching to renewable energies in the effort to slow down climate change.

Particulate matter (PM) 2.5 in emissions from coal-fired thermal energy can spread for hundreds of kilometers causing serious health issues as well as affecting soil and crops. Particulates can cause chronic respiratory diseases and lung cancer; even strokes; and other cardiovascular diseases. Moreover, coal burning emits wastes such as toxic metals, or ozone and fine particulates when come into contact with sunlight can create deadly smog. Inhaling such smog can lead to respiratory diseases. These are the results presented at a workshop organized by Green Innovation and Development Centre (GreenID) on 29 September 2015. According to a research by the Harvard University, coal-fired thermal energy has led to 4,300 premature deaths in Vietnam each year [3].

The most concerning matter is that Vietnam currently has 12 coal-fired power plants around the country while in the future, about 50 more power plants are to be constructed mainly at the centre or close to Red River and the Mekong Delta. This will leave significant impacts on the environment as well as agriculture production.

A story from The Dreamland Hue

At CHANGE, we do not hesitate to be different, but always open our arms to accept the diversity of everyone. Thanks to that, the atmosphere at CHANGE is always bustling and joyful, filled with “cultural exchanges” between regions, from which creative ideas are always explored. This story was brought by…

“CoVy” of CHANGE: the one who brings warmth to the office

As a member of the “Homie” team, as the name suggests, if anyone feels lonely, cold, or lost in CHANGE, you can find CoVy (this Vy won’t make you undergo quarantine, don’t worry) . Vy is currently in charge of human resources, and is always responsible for “taking care” of…

With love of the environment as the first stepping stone, as she comes to CHANGE, witnessing urgent environmental issues, photos and videos about wildlife poaching, getting in touch with more in-depth knowledge of the current ecosystem, Tam Anh – a girl who already harbors a great love for nature, becomes…