HO CHI MINH CITY, 31 MARCH 2016 Today the “I Can’t” campaign launches with the support of eight Vietnamese renowned artists with the message: “Don’t let pollution destroy your life”[1]. The photo album portrays the deadly impacts of pollution on daily life caused mainly by emissions from coal-fired power plants, which result in over 800,000 premature deaths annually around the world [2].

The communications campaign will continue over the coming months to raise public awareness and engage the youth from major cities and towns affected by air pollution from coal. This is a chance for Vietnamese people to join the fight against climate change and gain knowledge about energy in Vietnam, in particular the development of coal-fired power plants, which is one of the leading causes of pollution and is the largest source of man-made CO2 emissions. Up to US$1 trillion could be wasted on ‘unneeded’ new coal plants if increasing concerns about climate change and pollution later render them unused [3].

The public campaign idea comes from the fact that pollution and climate change threaten our survival, hence the artistic photo album with the theme of a world in ruins. Eight artists are transformed into different characters wearing gas masks to demonstrate the struggle they will have to go through. 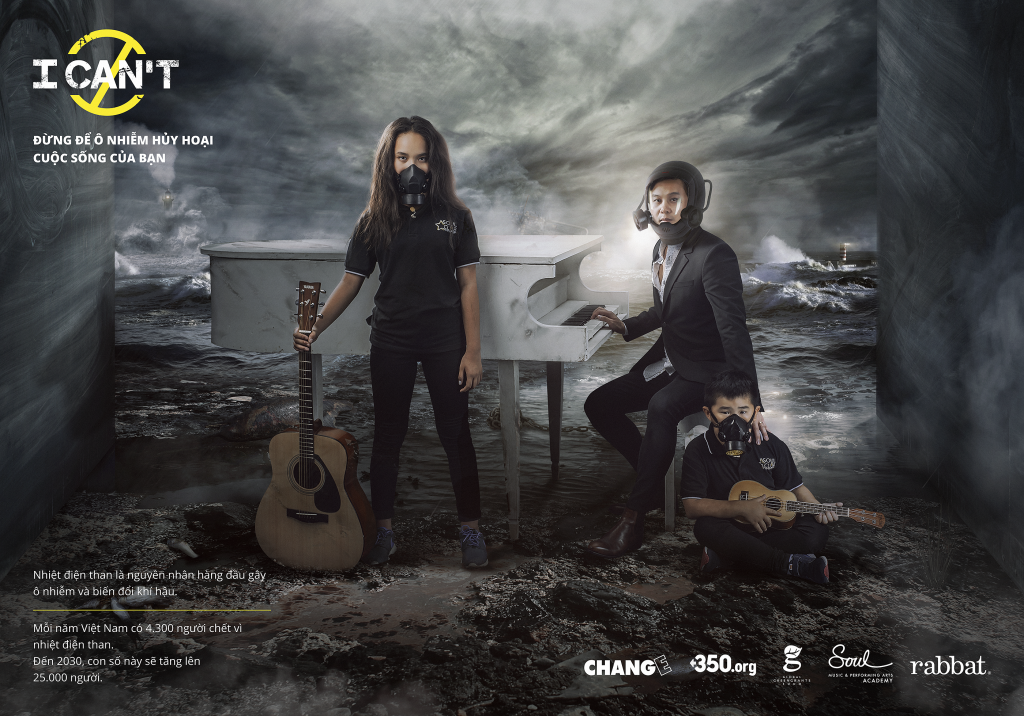 List of eight artists and their individual photo concepts are as follows: 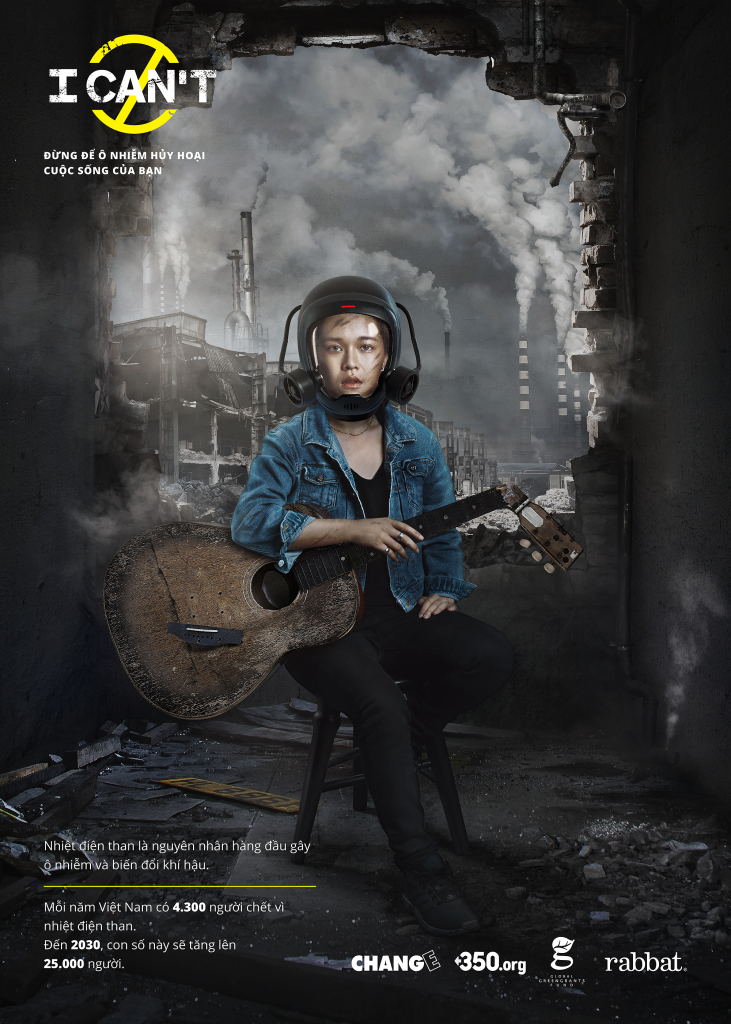 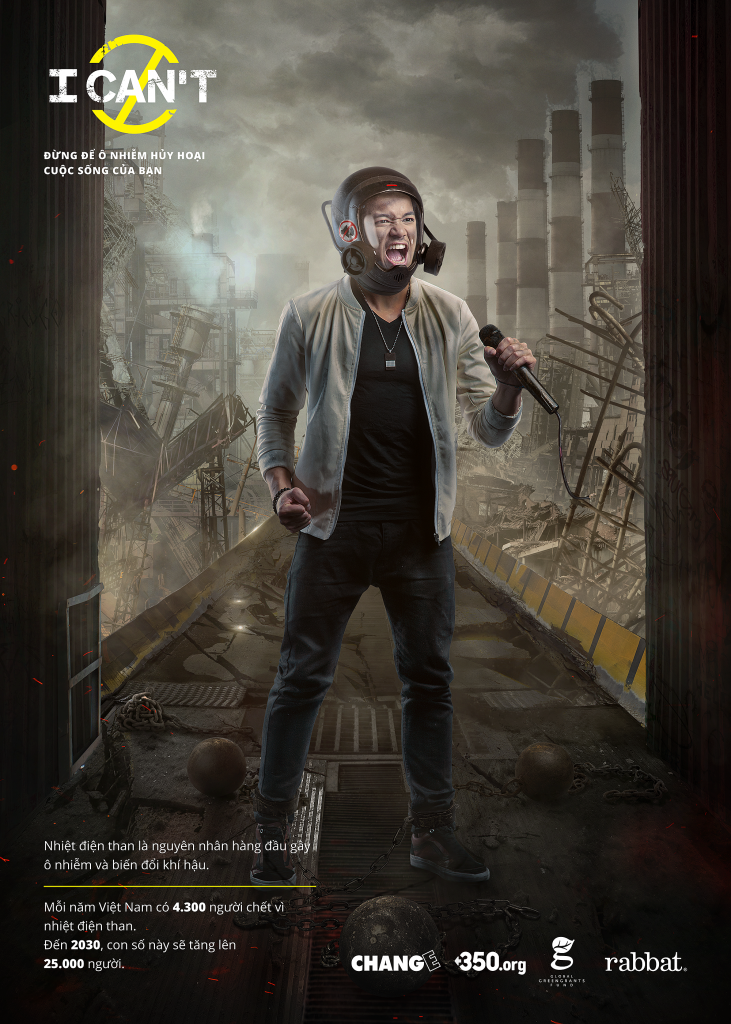 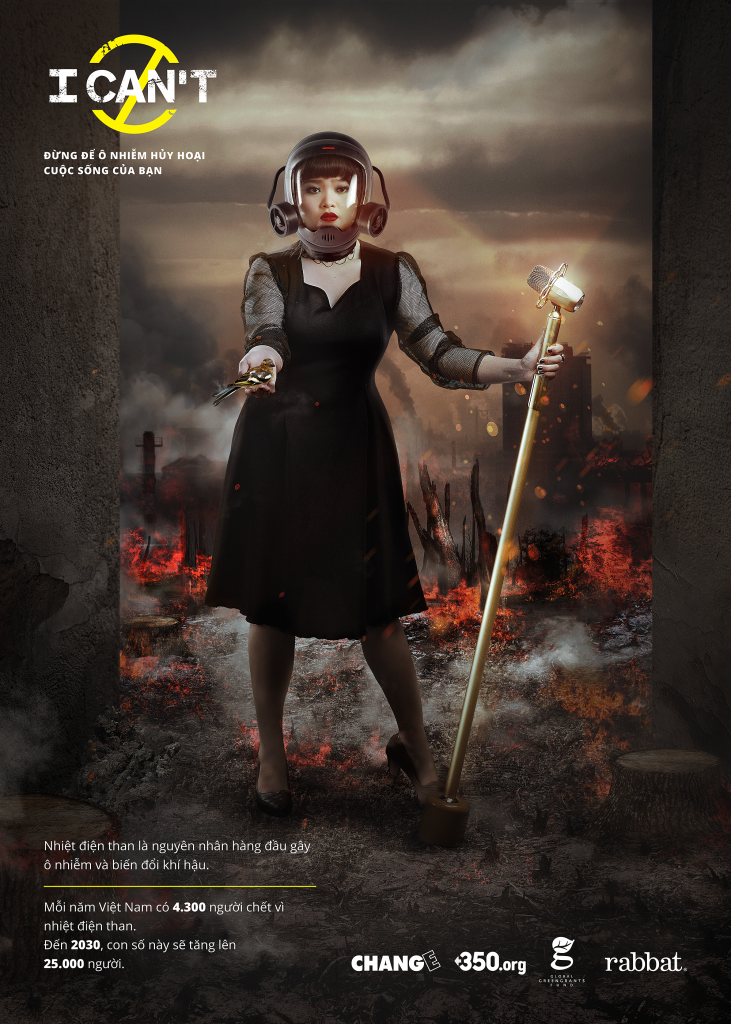 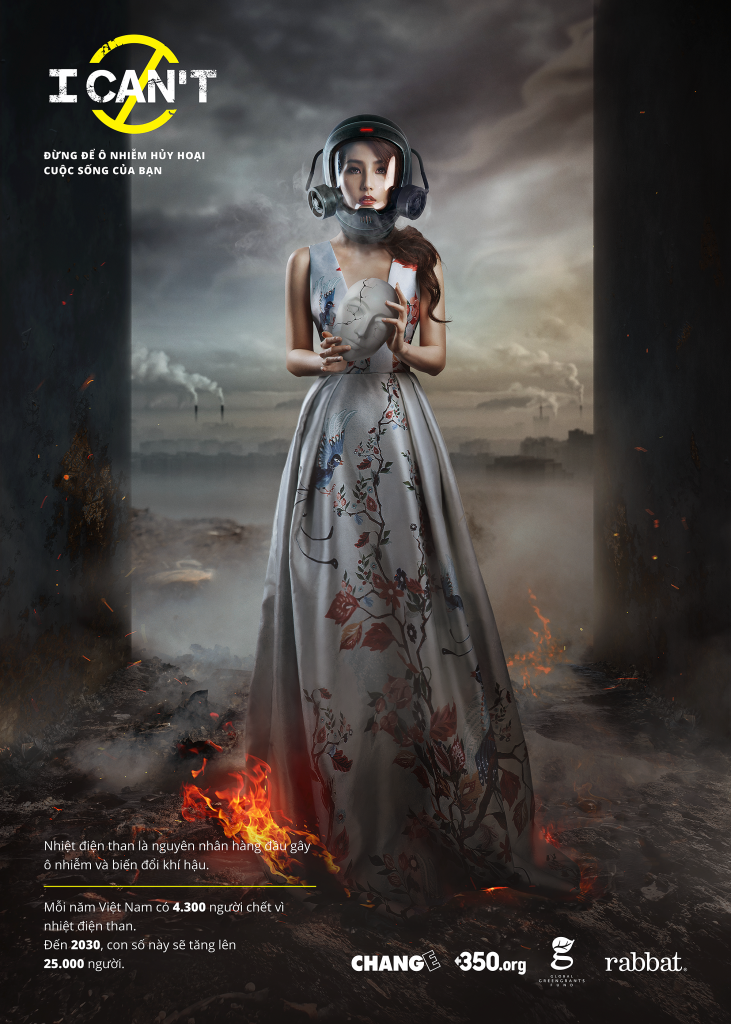 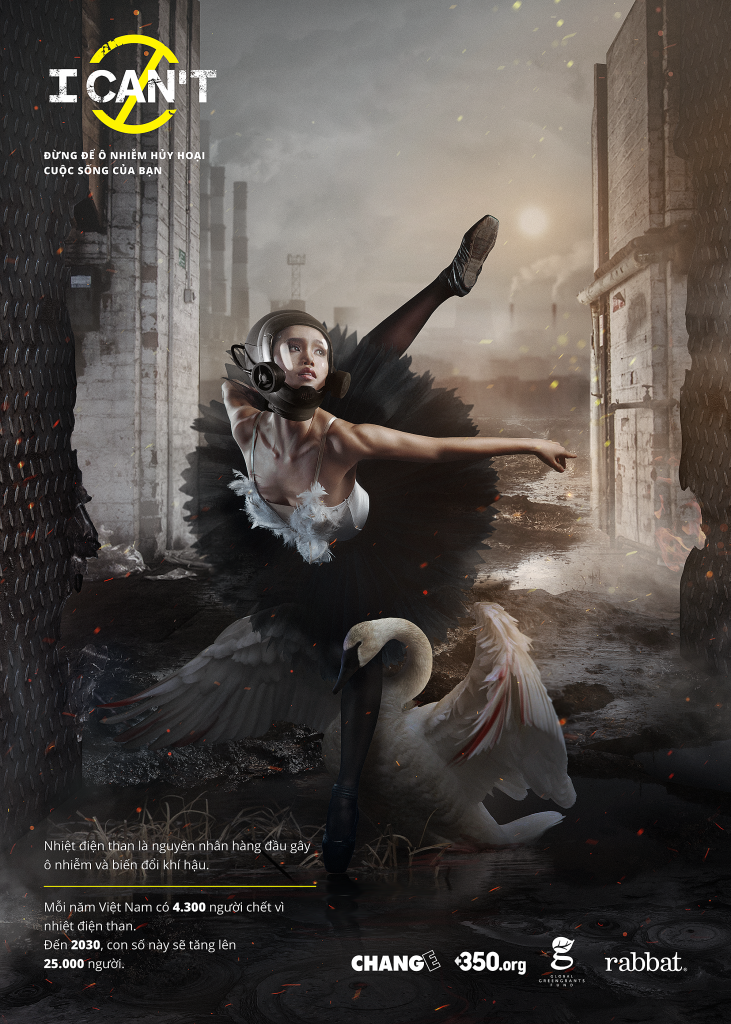 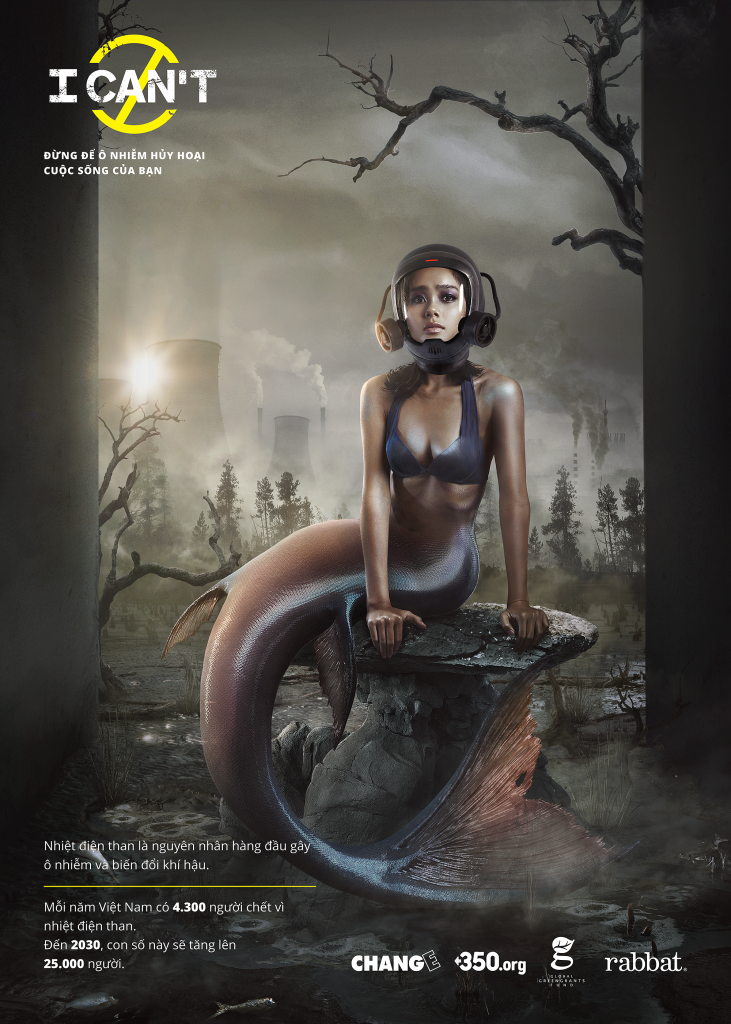 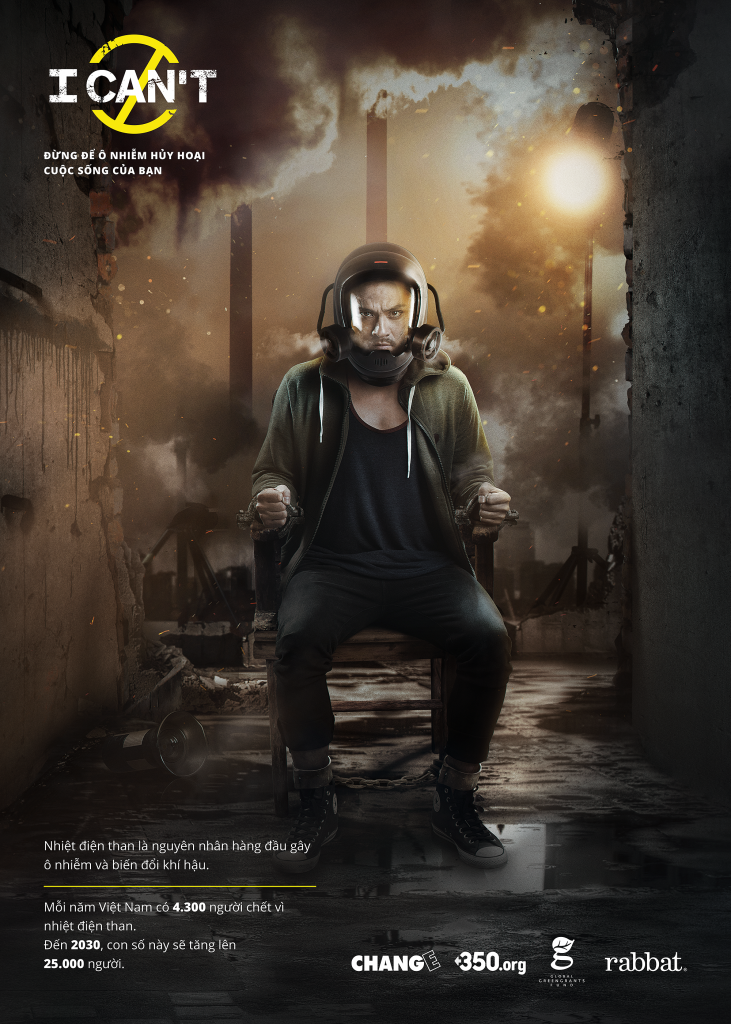 “I’m devoting myself to inspire my students and pointing them in the right direction in life. I want them to have a clean environment so that they can grow and shine while pursuing their dreams. However, their dreams, life and future are seriously threatened by the worsened air pollution caused by coal. As a teacher, an artist, I feel the responsibility to speak up. Now or never” – Artist Thanh Bui shares his reason for participating in this creative campaign.

The “I Can’t” photo album is intended to inspire people so that each individual will become more concerned about environmental issues, and start demanding changes in the country’s energy policy, particularly when Vietnam is the world’s third largest builder of coal-fired power plants. According to a report by the Harvard University, pollution from coal-fired power plants causes 4,300 premature deaths in Vietnam annually. By 2030, this number may increase to 25,000 if no change is made to the Power Development Plan of the Vietnamese government. [4].

The “I Can’t” campaign, coordinated by CHANGE with support from 350.org, Global Greengrants Fund and creative agency Rabbat, is a follow-up activity of a photo album of the same name, launched on social media in 2014, and of the Climate Action Festival “POWER UP” with participation of over 20 acclaimed artists and 1,500 youths in HCMC in November 2015.

Besides the “I Can’t” photo album with the artists, the campaign will also launch two other “I Can’t” photo albums focusing on family life and daily life with the participation of youths who are environmental enthusiasts from various parts of the country. Furthermore, the campaign also includes other activities to engage the community, such as “Gas Mask Challenge”, “Create ‘I Can’t…’ Slogan” competition as well as continuous communications activities on different social network platforms Facebook, Twitter and Instagram throughout the campaign to attract the participation of the youths who will help spread the message even further among the public.

While most countries are switching to renewable energy as an effort to slow down climate change, Vietnam remains the world’s third largest builder of coal-fired power plants (behind China and India). As the largest coal pipeline in South East Asia, Vietnam is planning to build 55GW of coal plants according to the latest official figures released in the week of 29 March 2016, despite an announcement in January 2016 that the government intends to review development plans of all new coal plants and halt any new coal power development [5].

Emissions from coal-fired power plants not only lead to climate change, but also are one of the leading causes of air pollution. Particularly, particulate matter (PM) 2.5 in emissions from coal plants can spread for hundreds of kilometers, causing serious health issues as well as affecting soil and crops. Particulates can cause chronic respiratory diseases and lung cancer, even strokes, and other cardiovascular diseases. Moreover, coal burning emits wastes such as toxic metals, or ozone and fine particulates that create deadly smog when come into contact with sunlight. These results are presented at a workshop organized by the Green Innovation and Development Centre (GreenID) on 29 September 2015.

The most concerning matter is that Vietnam currently has 12 coal-fired power plants around the country, with about 50 more power plants to be constructed around the areas of Red River and the Mekong Delta. This will have significant impacts on the environment as well as agriculture production.

Center of Hands-on Actions and Networking for Growth and Environment (CHANGE) registered under Vietnam Union of Science and Technology Associations (VUSTA) is a Vietnamese non-profit organization. CHANGE is the official national partner of 350.org in Vietnam. The organization aims to develop and mobilize resources in order to raise awareness, change behavior and build capacity of the community to tackle environmental and sustainability issues and climate change.

350.org is a global climate change movement started in 2007 with the participation of millions of people from 188 nations. The number 350 in the name of the movement means 350 parts per million (ppm), which is the safe upper limit of carbon dioxide (CO2) in the atmosphere according to the latest scientific finding. The ultimate purpose of the actions and activities by 350.org worldwide is reducing this level from the current 402ppm to 350ppm to prevent serious consequences of climate change. Up until now, 350.org Vietnam movement has attracted the participation of over 10,000 volunteers nationwide.

We Created A Monster: 5 Alarming Facts About Plastic Pollution In Vietnam

An article by Hiezle Bual published on Vietcetera Did you know that an average Vietnamese person produces 37 kilograms of plastic waste per year? If you can’t visualize that, go see the Plastic Beast. Just last week, our social media platforms were flooded with photos and reels of trees and plants, oceans…

Exclusive: The discovery shows the particles can travel around the body and may lodge in organs Microplastics cause damage to human cells in the laboratory. Photograph: David Kelly/Photograph David Kelly Microplastic pollution has been detected in human blood for the first time, with scientists finding the tiny particles in almost…

Could a behavioural change campaign save energy and cut Russian gas imports?

A call for collective action could help UK pivot away from dependence on Russian fossil fuels There is a second world war poster showing a red-faced couple looking angrily at their daughter as she adds more fuel to their fire. The caption reads: “Save fuel to make munitions for battle.” It was…