YEAR-END GATHERING: FRIENDS OF THE RHINO

Ho CHi Minh City, 26 January 2016, the campaign “Stop Using Rhino Horn” organized the year-end gathering “Friends of the Rhino” with the venue-sponsor Gem Center, and with the participation from around 150 individuals, including ambassadors, celebrities, businesspeople, media partners and lead doctors– partners who had supported the campaign last year. The gathering re-examined the issue of rhino horn consumption in Vietnam and the campaign activities in 2015; appreciated efforts of partners and brainstormed further solutions in 2016; and sent strong message about the commitment of Vietnam together with South Africa to solve the rhino crisis. 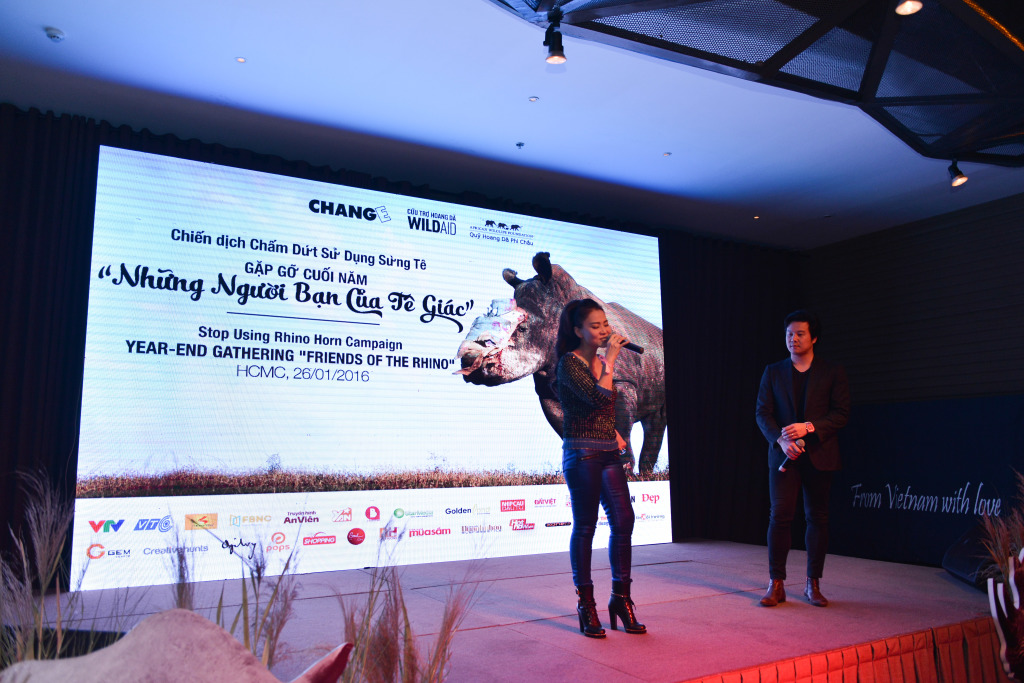 With a rhino named Hope as the night’s symbol – showing incredible resilience despite being a former victim of brutal poaching, the gathering recounted the emotional journey of Hope, and through that called for participants’ unity in spreading to friends and families the message about the realistic ability of rhino horns and the corresponding brutal poaching. The event hoped to prevent and end the consumption in Vietnam- one of the leading two markets in rhino horn consumption in the world.

During gathering, participants had various opportunities to interact with the campaign: taking photographs; clipping nails as a “Nail-Biter”; learning a unique African dance, about the continent’s cultures and nature; and proposing ideas to make the campaign more successful in 2016. 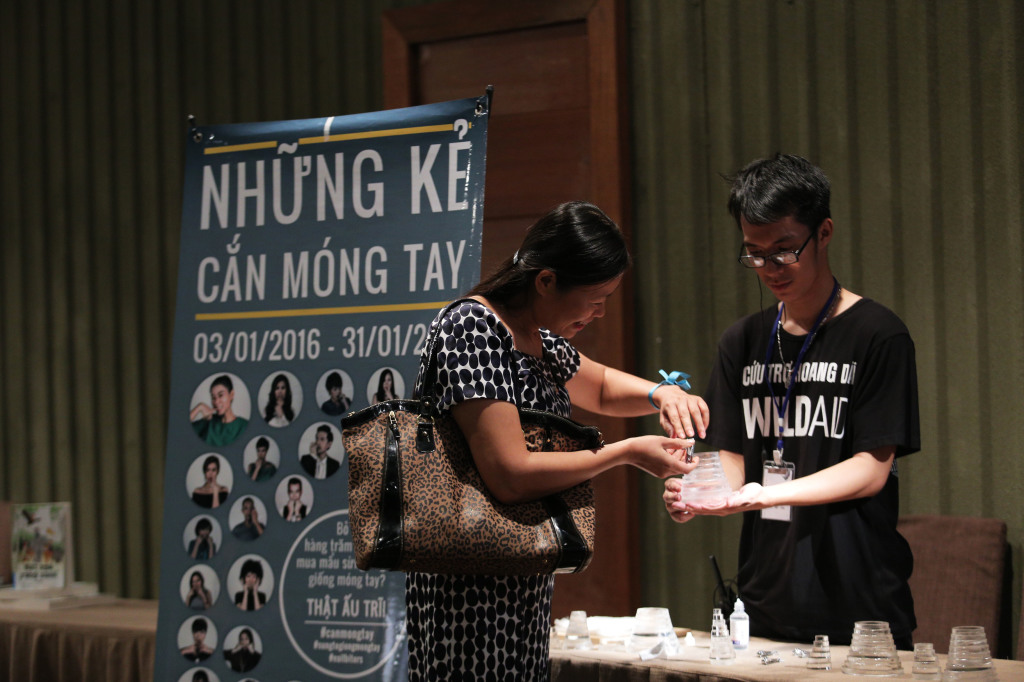 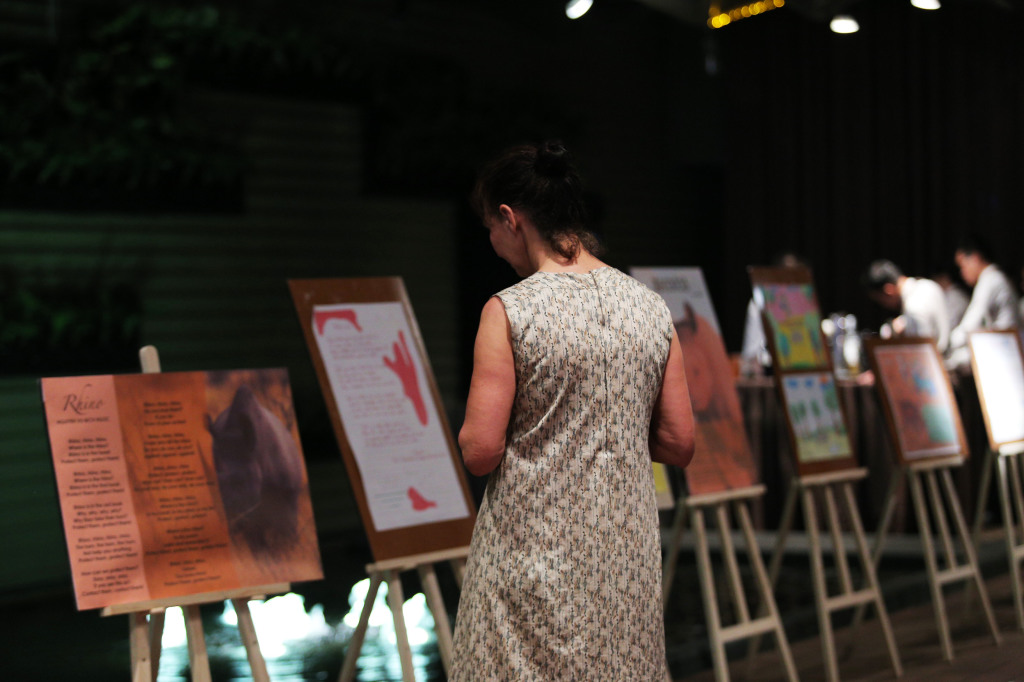 The highlight of the night entailed a meaningful gathering of all participants on the the main stage to tie colorful ribbons to a hand-made blanket prepared just for the gathering. This act symbolized the Vietnamese unity in helping solving the global rhino crisis. The blanket carrying the participants’ good-will will be sent directly to Hope, the rhino in focus of the evening. 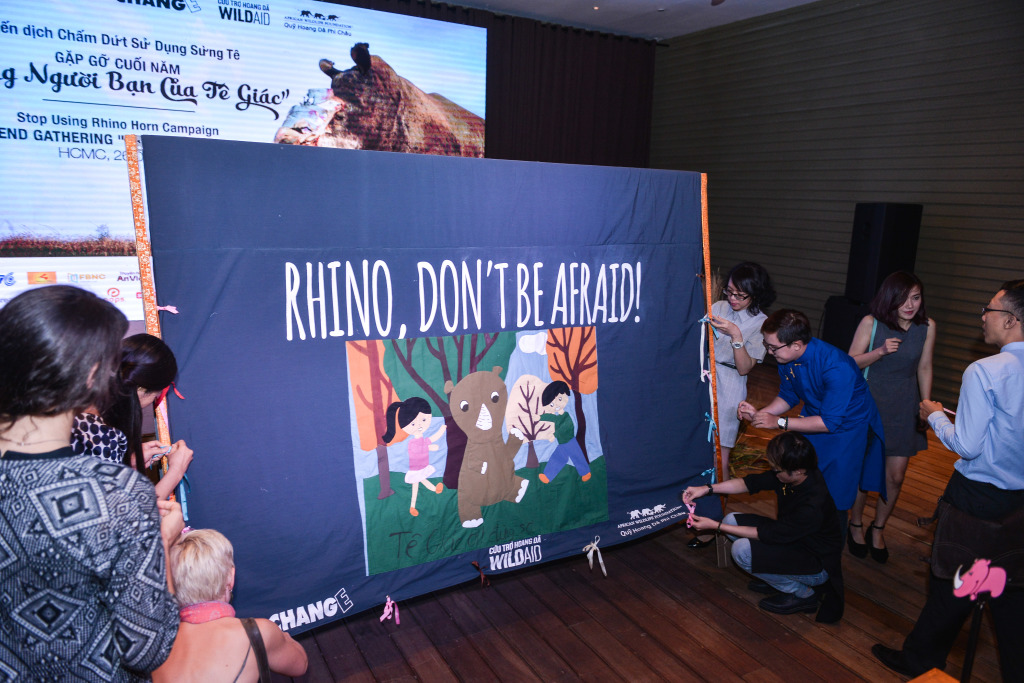 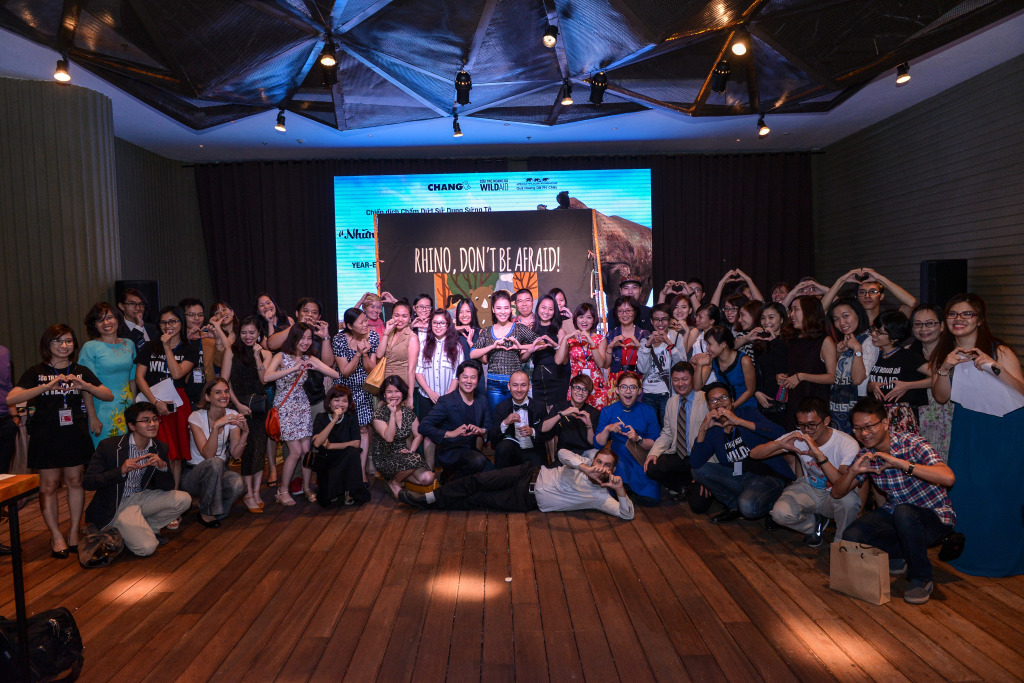 The “Stop Using Rhino Horn” campaign is a collaboration between WildAid, African Wildlife Foundation and CHANGE. The campaign aims to increase awareness on using wildlife product through communication products. In 2014, broadcast networks, radio stations, printed news, online news, magazines and other domestic media partners committed to support a value of near 27 billion Vietnamese dong ($1.2 million), through free PSA broadcasting and free printed ads with the appearance of campaign ambassadors urging the public to change its behaviors to protect rhino species. In 2015, the campaign was bigger in scale, and achieved many encouraging results:

– Received more than 30,000 signatures for the “Petition for Rhino.”

– The Rhino Funeral “Back to Dust and Sand” attracted participation from the youth and intense debate on social media.

– The Call of the Wild show attracted participation from 26 artists and was watched directly by 1,000 audience, and hundreds of thousand audience through VTV3.

– Three leading doctors in oncology, andrology and traditional medicine have publicly refuted any medicinal use in three PSAs.

– 450 news article wrote about the visit of Hollywood star Maggie Q, the campaign ambassador, to Vietnam.

– An intimate dinner with Sir Richard Branson and 30 leaders in businesses provided solutions to the rhino crisis, and raised $50,000 for the campaign.

– 100 businesspeople signed a pledge to not use rhino horn, animal products and spread the message to friends, families and colleagues.

In 2016, we will continue to produce PSAs, printed ads, outdoor ads; carry out artivisms; organize seminars with Buddhist followers; insert campaign message in high-quality products for men; lobby city leaders to urge the public to not use rhino horn; organize a wildlife carnival; welcome international stars to Vietnam; and other social media activities.

Deliver pangolins from Thanh Hoa to Hanoi to customer for his wife, the man was caught red-handed

ANTD.VN – When being checked by the police, the man was surprised because the styrofoam box that his wife asked to deliver to the customer contained super rare animals banned from trading in the market. At around 10pm on December 12, 2022, the Economic – Drug Crime Investigation Police, Thuong…

On December 5, the Police Investigation Agency of Lam Thao district, Phu Tho province, just issued a prosecution decision to the woman who killed a king cobra weighing nearly 10kg. Photo of the discovered king cobra. Photo: Lam Thao district police. Before that, at about 9:30 pm on December 3,…

We are no longer accepting donations.